This is the eulogy I gave at my sister Andrea's funeral.

When someone is dying in your life, your mind plays old recordings of things they have said to you, stories they repeated and sayings they relied on in their day to day dialogue.  The human brain is a funny thing, in that it scans these words and pulls out inconsistencies in the picture we have built of a person in our mind.  Andrea used to claim that my mother would say “Andrea is always bringing home stray dogs”.  Even though I knew my mother to be referring to the human equivalent of a stray, it was still an incongruency to me.  David and I can testify that Andrea never brought home a stray dog.  We brought home several, and there would be hell to pay if they went near Andrea’s domain.  She didn’t like stray dogs or the human version, which I assume is like a vagrant.  But I now see what my mother meant, and actually she was quite wrong on both accounts.

I now assume mum was referring to the myriad of colourful characters that Andrea would bring to the house, and there were some hair raisers. “Transsexuals”, drag queens, people with “alternative lifestyles”, drug users and a range of other eccentrics. But if my mother looked more closely she would have noticed that these were no homeless vagrants or “strays”. They were mostly clean and well dressed young people.  They may have worn leopard skin pants, but they would have been paired with a fashionable nylon shirt and leather jacket.  If she bothered to inspect their shoes she would have found they were expensive and probably European made.  Their nails may have been painted different colours but would not be dirty and unkept.

You see, if we keep the dog analogy going these were not stray, they were more like wild dogs.  Wild dogs are not homeless. They have a home, and it is usually meticulously maintained, well guarded and ideally positioned. Wild creatures are not vagrants and they are not lawless.  They have laws and rules, but they submit to them as they choose, they are instinctive animals and gather with their own kind.  What my mother may not have understood about her daughter’s friends, is that they were of the same kind as her, untamed in heart and wild in spirit.  The type of artistic off beat character that God plants in every generation to keep us all moving forward, thinking bigger, finding beauty and appreciating life.

Andrea’s creative and free spirit teamed with my cousin Kevin’s cunning and strategic genius, set us up for some wild times as children.   Our mother had a close sister, Carol, and between them they had nine children, but six of us were particularly close. Three of Carols’ children from her first husband and three of us were inseparable. Kevin and Andrea, David and Danny, and Nicky and I.  Kevin and Andrea were the leaders of our little gang and took us on many adventures around the streets of Brisbane or the hills of Wodonga, and Valdora.  Most of the activities, if not illegal were fundamentally unsafe.   With us younger children in tow they led us on many an adventure to water towers, bush lands, skating rinks and parks.  We had some tremendous fun, even if it came at the expense to public civility and property.  We won’t mention the time they burned down a national park while trying to make a fabulous picnic.  As a child Kevin and Andrea were as close to heroes and role models that I had, God help me.

Andrea was beautiful, and well dressed and energetic.  She always thought of fun things to do, and put an interesting spin on a topic.  She never seemed to be bored or without something interesting to do and any task she put her hand to, well she didn’t always succeed at, but she had a blast.  Therefore, people were attracted to her and she had a great volume of friends as a young person.

People who know us well know that Andrea and I did not always get along.  We lived together for many years, sharing a room as children then sharing a house while we went to university.  Those who lived with us (Julie-Ann & David) will know that this was never an entirely successful endeavour. If you would indulge me another minute with my dog analogy, let me say that wild and domesticated creatures cannot really live together in peace.  While they respect and admire each others freedom and security respectively, they just work to different rhythms of life.  They can however love each other deeply and learn from each other…. I will tell you some things I learned by having Andrea as my sister.

Don’t wait to cut the toast before you take the first bite, because you will miss some of its heat and there is nothing like hot toast with butter. If you wear bright patterned pants, team them with a plain black or white shirt. Don’t ask for permission too often.  Garnish your food even if you are eating alone.  Beauty exists in the mundane, and in fact maybe this is where beauty exists in its finest from. Andrea was able to find pleasure in the simple things in life more than anyone I have ever known.  Perfectly brewed tea in a fine bone china English cup. A crisp white wine in a delicate crystal glass.  A well made pair of shoes in red, a dead branch, a piece of metal re-moulded by fire.

I want to acknowledge here that Andrea underwent drastic personality changes in the last twenty years as her mental health was affected by Huntington’s Disease.  She was not the easiest person to remain friends with.  The nature of HD is that sufferers are unable to properly judge appropriate personal boundaries.  I want to thank those of you who went the distance and I want to thank those of you who just couldn’t but went as far as you could manage.  I needed to be estranged from Andrea for periods of my life but I loved her deeply and always will.  I know she is safe now and restored to the perfect form in which the saviour moulded her.  I don’t know why God decided we would be sisters, but I feel so privileged that he did, and I will be thankful for her my entire life.

Andrea died with me sleeping by her side in a Caloundra hospice in September 2018. 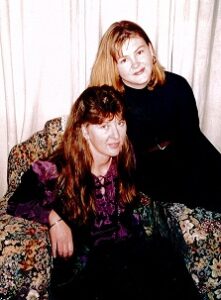 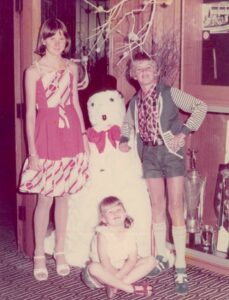 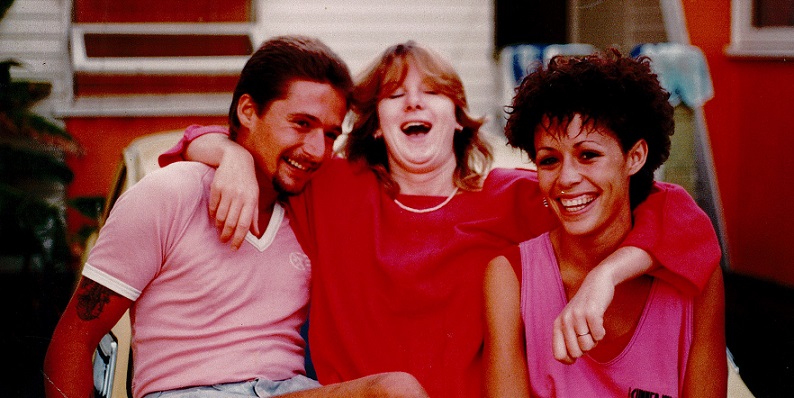 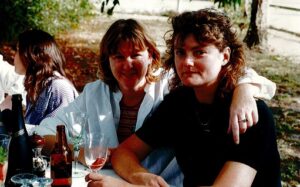 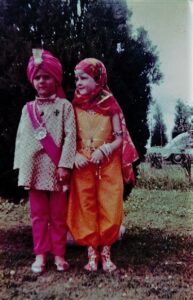 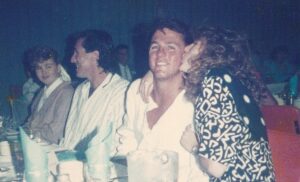 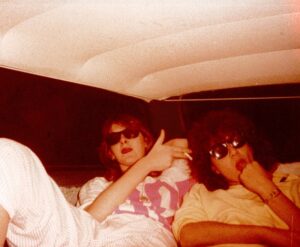 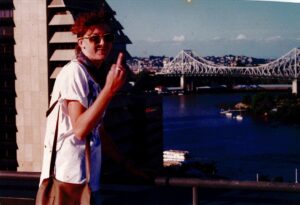 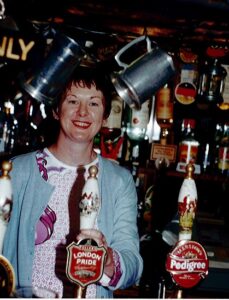