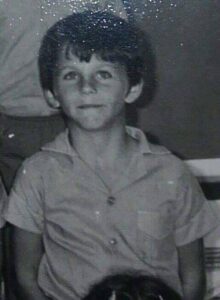 Kevin was a hero figure in a childhood with very few character models of any kind.  In a bogan populated public housing estate, he instilled in me a sense that somehow it wasn’t us that was wrong it was always them. In a family where all of our parents managed to stuff up the basic tenets of parenting, where we were left vulnerable to things that children should never have to see or face, he seemed to be bullet proof.  He gave me the impression that not only was the culture around me rather crude, worse still, it was poorly dressed.  That anyone who wore those ghastly stubbies, thongs with those vile blue singlets, could not be trusted in any way. He instilled in me an arrogance that scorns shame, that rises above, that looks down its nose on that which seeks to destroy us. I didn’t think this neat smart mouthed kid was different to everyone else, I thought everyone else was different to him.  He was my hero and I loved him with all of my heart.

As we grew I could see that his friends were different to the regular people. His friend Marshal had long hair and wore leopard skin tights, even before the eighties rock bands made that look fashionable. He referred to some of these people as ‘drag queens’ and to me, and my ten year old friend, they were hilarious, and actually to little girls they were very safe. I knew this crew were a bit different to the blokes down the street with matching ford falcons, but I just thought I was so lucky to have a cousin like Kevin to show me you could make your own rules in life.  Eventually, however I realised Kevin was nothing like bullet proof.

Kevin loved drugs, if he wasn’t taking them he was talking about them.  I remember when he first tried to commit suicide, it was terrifying.  We were a long way from the hospital on my aunt’s property on the Sunshine Coast, and my mother had him in a bath trying to shove salt water down his through to make him vomit.   When a person you love and look up to as a child falls apart in that way, in seems like your world is crumbling.  By the time I reached my teens I could see Kevin was broken in fundamental ways, and given our upbringing this was not surprising.

When Kevin met a stable man he wanted to make a life with, we hoped he would settle. He would call my mother, his favourite aunt, late at night in tears, and they would talk for hours.  When a call came on a cold July morning, two days after my seventeenth birthday at four am, I knew that it wouldn’t be him, I knew that it would never be him again, and I prayed for the sun not to rise.

Kevin’s death broke me in pieces.  Not long after this I found myself as a young teen without a home and with the realisation that my own mental health was not in great shape.  One day as I sat on the floor of my brother’s house where I was staying, I picked up a New Testament that someone had given me.  Through that little book, I found myself, my people and a God who healed my heart and put salve on my wounds.

Fast forward twenty years and I read a comment in a worldwide same sex marriage debate that gay young people are being killed by people who deny the legitimacy of what was then called ‘Gay marriage’.  Hearing someone put the blood of Kevin and those like him on my hands outraged me. I was a leftie in those day, so outrage was my default.

If Kevin had have come through and married that nice man he had made a life with, I would have come to the wedding, I would have made him a cake.  I would have loved him for ever, and met him at Christmas; me, the God botherer, and him, well just a man with another man. I would have welcomed him to my Church and introduced him to my crazy fundie mates.  We may have disagreed on fundamental tenants of faith and marriage but he would never have forced me to say that which was against the religion that saved me from my demons, many of which we shared. And neither would the gay friends or the gay family of most evangelical Christians.

Senator Richard Di Netale, recent suggested that a doctor with traditional values is unfit to practice in a broad range of settings.  As if our faith shields us from the sensitivity of the broader human condition. What he is suggesting is that for the sake of Kevin and those like him, people like me may have their fitness to minister to the sick, the dying, and the troubled questioned, if those patients have various sexual preferences. And let me say that when Kevin was prone to drugs, there were several doctors who were prepared to give him drugs for, lets say ‘favours’, and I assume they were not of traditional values, so that memory made me feel the implication a little more sharply.

Christians have always excelled in indiscriminate service, this is pretty hard to question.  In fact, I could list some of the hospitals schools and welfare agencies that have been started by Christians and Churches but there isn’t the space. Almost all of these organisations are indiscriminate in service and employment except where they relate to the sacraments and special focus on the needs of traditional families and heterosexual couples (like male to female domestic violence). The Salvation army, for instance are indiscriminate in their ministry but within their own church are very orthodox in regard to family and marriage.

We are being asked to trust that these people and organisations will be protected in the wake of a change to a foundational family law, yet we are bombarded with this rhetoric.  No one in the government will give us any assurances at all, no one will even talk about it.  In fact, now we are encouraged to talk less and less about family types and by doing so the government is continuing to place Christians at war with the LGBTI people in our families, in our streets and on our Facebook pages. Senator Wong, in calling for protection for ‘rainbow families’, claiming that her type of family will be “collateral damage during the war against equality”[1]. This is strong language. I don’t want to harm your family Penny.  The suggestion itself is hurtful, and I can’t help but wonder if you know that.  That you in fact know that there are a million complications to changing this law for our community and that is why your government advocated to keep it as long as you did.  For what it is worth I am sorry you and your family have been offended at any inappropriate or miss timed expression of our traditional views, some people are nobs. But we can’t have this debate without talking about who we are. And we have to have this debate.

And who are we? Well we are the Christian church and we have at our core a definition of marriage as the reflection of the image of God and God as male and female. This principle underpins, not only evangelical Christianity but almost every traditional Christian church in this nation including the Catholic Church, Coptic Church, Orthodox, Mormonism, Jehovah’s witnesses. I would like to make peace with our rainbow friends, they actually don’t belong to Ms Wong they belong to us too.  They are our cousins our sons our brothers. But that doesn’t mean we will be coming to agreement on a definition of marriage any time soon.  We are being put in a role of the haters and causers of harm, but unless we come to some kind of agreement there will just be more division.

I have to write this these personal stories because LGBT activists don’t fight fair. Like the worst authoritarian regimes, they keep their weapons at all times at the place of the most vulnerable. They know decent people will not attack children and young people, so they keep these groups out front. It is the very nature of Christ followers to protect the vulnerable, so many don’t speak out, lest they cause harm. And the ones that do are often not representative of most Christians. This tactic has been successful in removing the religious freedoms of the most devout all around the world. Same Sex Marriage advocates argue that the greatest number against the law are Christians. If over 40% are now saying they are voting ‘no’ in the survey, well that is not all fundamentalist Christians. I suspect Aussies are calling bullshit on some of these tactics. That they can see we are not getting a fair go. And actually, that’s what we want, a fair go to continue our religion without discrimination.  Although some of us are royal pains in the arse, generally we have an overwhelmingly good impact on this country and we deserve a say, and to have our rights protected. The gay man I loved and who I love still, taught me to call out bullies and fight for my own.