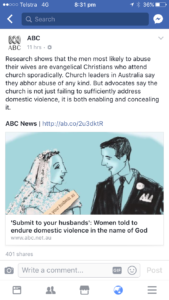 Comments: The ABC made a very public and headline claim on The 7.30 Report, ABC News Online and on ABC Radio that “research shows that men most likely to abuse their wives are evangelical Christians who attend church sporadically”. The very next line the story goes on to say “Church leaders in Australia say they abhor abuse”. So the reader could safely assume this research would be Australian based and actually reputable, based on representative evidence . Especially given it is headline news across tv, radio and online, and makes very clear claims about the evangelical community of which I belong. A community that appears to be increasingly under scrutiny by your tax payer funded organisation. If the headline for instance was “research indicates that gay men are more likely to be abusers of children than straight men”. Which of course is ridiculously, scurrilous and unfounded, you better have the research to back it up. But no. The source that is quoted by By Julia Baird and Hayley Gleeson is Tracy. This article by Steven R. Tracy is “Patriarchy and Domestic Violence: Challenging Common Misconceptions,” JETS 50 [2007]. And what do we find there? Well quite a strange mix actually, including the claim that evangelical Christian men who regularly attend church are far less likely to be abusers in the unclear population sampled. Not a great headline. The article does say “Rather, there is an inverse relationship between church attendance and domestic violence. Conservative Protestant men who attend church regularly are found to be the least likely group to engage in domestic violence, though conservative Protestant men who are irregular church attendees are the most likely to batter their wives.44 Thus current research disproves the feminist hypothesis that patriarchy is the single underlying cause of all abuse against women, though it strongly suggests that patriarchy plays some role in domestic violence.”

But in the research references we find are varied to say the least. A few articles there are American based and we have no idea of the sample size, socio econimic background or demographic at all. It could be conducted for instance in Baptist heartland where most of the population would identify as evangelical Christians, and indeed culturally be required to attend at least Christmas and Easter (now and then). Or where the population is heavily poor or African-American, giving it little relavence to the Australian population and therefore a surprising basis on which to yield such an acusation at my community. But most surprising of all in the reference was apparently the wording from which the headline draws reference and it says this, “Similar trends were noted in an earlier non American study which found that the husband’s church attendance was an identifiable risk factor for wife assault: 11.2% of husbands who never attended church assaulted their wives. But only 2.2% of husbands who attended church at least monthly assaulted their wives, while 6.2% of husbands who attended church sporadically assaulted their wives: David M. Fergusson et al., “Factors Associated with Reports of Wife Assault in New

So here we are quoting a study that is over thirty years old from New Zealand. Maybe a more culturally similar group but with no indication of socioeconomic background or sample size and thirty years ago. Really ABC? And may I say that evidence here, in this odd bit of research, is that there is an inverse relationship between church attendance and domestic violence. Exactly the opposite of your headline. If you made accusations about any other sector of the community on that basis they would be screaming. But churches all come out say how sorry they are.  I have been involved in the evangelical church a long time and I can assure you I have seen sexism, and I have seen the bible used to back it up, but making false accusations to breed more ill feeling about our community than it already has, is not going to help that. Also I am in business and I have seen sexism in business as well. Certainly not less than I see in the church.

What’s more the evangelical church I attend have quite an amazing domestic violence ministry. They could never publicly speak about it in detail because of the security concerns involved. So an easy target for a community that won’t defend itself for the security of those it ministers to. I have never heard these verses you quote justify any violence from the pulpit in my 25 years attending evangelical church, actually quite the contrary.

Of course domestic violence exists in the Christian community but I would argue on the whole we deal with it better than most and need no help from the ABC in inciting hatred against our community. If you question this misinformation incited hatred you need only look at the Facebook comments from people that read the headline and not the article. We are called all sorts of things, pedophiles being the favourite of course.

We are all working on the coalface of this issue and the absolute crap you put as your headline, unfounded scurrilous rubbish, does not help us help these women. The women who work in the domestic violence ministry in our church work tirelessly and you do them, and the men that support, them a great disservice.