Lately, I have been feeling a bit like we have a sexual politics version of ‘McCarthyism’ emerging in our culture.  McCarthyism is named after U.S Senator Joseph McCarthy, and his post war campaign to weed out communists from positions of influence, the entertainment industry and business. McCarthyism is also used “more generally to describe reckless, unsubstantiated accusations, as well as demagogic attacks on the character or patriotism of political adversaries.[1]”

Sound familiar? The language being used in public life here and overseas, 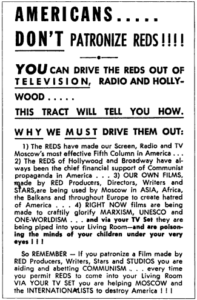 in favour of LGBTIQ ‘rights’, is making me uncomfortable.  Ever since Penny Wong declared the campaign against same sex marriage to be the “war against equality”[2], I have been more aware of the positioning of my own people as the enemies of equality.  Enemies that need to be tracked down and weeded out. 809 companies have now joined in The Equality Campaign, in support of Same Sex Marriage. I am not worried about that. What bothers me is the new sport of pointing out the exclusions from this list.  This seems to be a parallel campaign to rid society of the ideological poison that are traditional and religious values. In a report for The New Daily, James Fernyhough has gone about, not only listing the companies for SSM, but those who are conspicuous by their absence.[3] He points out that business is overwhelmingly in support of same sex marriage, and that there is not a single company listed on the Marriage Alliance website.  This claim is made, as if it is just by some great groundswell of public opinion, that no one in business has traditional family values. It couldn’t possibly be that stand for the ‘no’ campaign would make company’s targets of malicious attacks.  And given that companies are legal persons not moral ones, in the main there is no need for a company to have a position on marriage. But what is worrying is the work he puts into finding those who are not in the ‘yes’ camp.

The New Daily has gone about the McCarthyistic work of seeking statements from those companies who have not come out in favour of SSM, or who are “sitting on the fence”.  And for those already in favour of SSM, Fernyhough is wanting to know whether these companies are, in the depths of their corporate hearts, true equality supporters, and not, God forbid, only in it for financial gain.  In this crusade, Fernyhough has enlisted the advice of a Public Relations expert, who makes the astounding claim that “she did not accept that the decision to back marriage equality was motivated exclusively by profit, arguing that companies genuinely held moral values”. This is terrifying for a Christian businessperson, who do hold moral values, just not the right ones. Earlier this year the Australian Christian Lobby had to remove the name of directors from its website because it was affecting the livelihood of those directors. Company after company is being forced into submission, if it has directors that have in the past dared to speak out in favour of traditional marriage, not that any would in this environment.

In the UK the new ‘Spanish Inquisition’, is to ask politicians whether they think homosexuality is a sin, in order to determine if they are fit for office. The Independent reported that Liberal Democrat Leader, and devout Christian, Tim Farron, had refused to answer the question of whether he believed homosexuality to be a sin.  But the phrasing of the report bothers me deeply.  The article in the Independent says, Mr Farron, who had “previously declined to say whether gay sex was a sin, was again pressed about his views on LGBT rights on Tuesday night.”[4] What is frightening here is that “LGBT rights” now seems to include the right to live in a world without the Christians or traditional family values. This is a direct attempt to remove Christians from office in areas of influence, because of their personal religious convictions, and oddly their sexuality. In this strange world, the LGBT ‘bill of rights’ completely obliterate anyone else’s rights to conscience on matters of sexuality.

Is no one aware that Christians actually believe all sex outside of heterosexual marriage is a sin, and despite that we don’t go around wantonly persecuting fornicators? Likewise, people who cohabitate are not tracking us down and ‘outing’ us for our conservative sexual values, in relation to their relationship status, and sexual practices. Australia had a Prime Minister who didn’t believe in marriage, and cohabitated with her partner at The Lodge, and yet there was no campaign to ‘out’ members of parliament who believed her living arrangements were not right in the sight of God. Frankly she didn’t seem to give it much thought, and certainly didn’t give it any air time.

I am a Christian and a businesswoman. In 20 years of business I have had many gay and lesbian clients. I have won their business the same way that I have for anyone. My business has no opinion on marriage, because although a company is a legal person, it has no independent moral thought. So of course, my company will recognise any legal definition of marriage, and will continue to be indiscriminate in service, no matter what happens to marriage legislation.  But where is my freedom of conscience, with this insistence that I must externally display a personal celebration of my client’s personal relationships? I have had clients of all kinds, who’s values I neither celebrate, nor condemn. Because that is not the job of business.

Over the years there have been a few tests to this neutrality principle, but never by anyone from the LGBT community.  When I was a very young business owner I was faced with a couple who were Satanists. It was interesting to say the least, but not once did I have a second thought about performing the business for them.  I didn’t like them, I didn’t enjoy being in their company, and I was uncomfortable among the satanic worship paraphernalia when I had to visit their home. But I wasn’t selling my soul, just the services of the company, and we performed the business as requested for the fee quoted. In contrast I have enjoyed working for many gay clients, some of whom I have liked very much, others not so much. Just the same as Jewish people, Muslims, bogans, rich people, working class people, sports people, business people, and any mix of these identities. This is what I love about business.

One interesting example, was when we were asked to do a quote for an indigenous man who had fallen on difficult times.  Because of an injury and illness, the man wasn’t able to care for himself very well. The home and the man were in disrepair.  I performed the quote happily and we both enjoyed a nice chat.  Later he came into the office and asked to see me.  He said, “I decided to go with your company, not because you were the cheapest, but because you came into my home and treated me with dignity and respect, while other companies did not”.  He was a man who knew the face of discrimination, and he paid me a great compliment that I won’t forget. My company did not openly advocate for indigenous rights, it did not fly a native flag, but it served the indigenous community without discrimination. A company doesn’t hold “moral values”, it has legal obligations of equal service.  Humans on the other hand have a whole range of different opinions and feelings on a range of issues. The Law Society has recently been forced to retract its blanket support for SSM, because of the diversity of opinions amongst its members.[5] Companies are not designed to be a reflection of cultural values, they are designed to be in the service of people in exchange for money. Personal attributes given to companies are usually only placed there for the purpose of marketing, I hate to shatter anyone’s illusions, but that’s the truth.

The ‘yes’ campaign has corrupted the word ‘equality’, by paralleling its political campaign for the redefinition of marriage, to the fight indigenous people have had for equal recognition in this country. They equate the fight to change in family values to the fight that Martin Luther King fought for civil liberties. In doing so they position Christians as their oppressors.  I recently had someone tell me that my beliefs on marriage were like Apartheid.  The Guardian has said that it will not publish spurious arguments against same sex marriage, while these arguments are the very definition of spurious.

Never in my business career have I even considered discriminating in business on the basis of sexuality, race, gender or religion.  Nor do I personally, but in terms of my religious beliefs, I cannot now, nor can I ever, recognise two people of the same sex, as being married. My business can of course, but I cannot.  So why does my personal definition of marriage make me unfit for the marketplace? And why this continued attempt to weed us out, and remove us from the market, the government or any position of influence? This has been done before, and history does not view it kindly.

Australia has to decide now what it is going to do with a community whose foundation religious beliefs will contradict a foundation family law. Keep sexual politics out of business, or persecute business people of religious conviction. You choose.